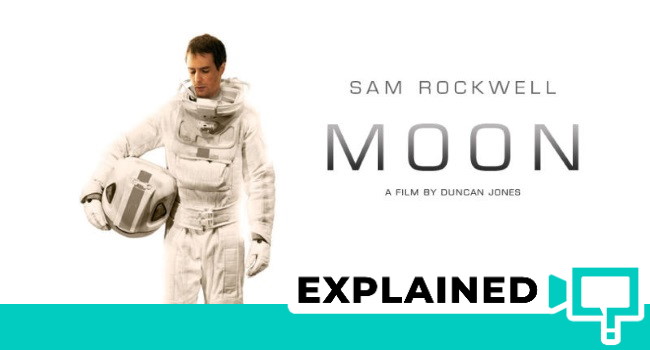 Moon is a 2009 science-fiction film directed by Duncan Jones, who has directed films like Source Code and Warcraft. Moon’s cast has Sam Rockwell as the lonesome astronaut on the Moon, he’s brilliant. Kevin Spacey plays the voice of the robot GERTY on the Moon station. Moon is a slow-paced film that follows the astronaut and his 3-year work assignment. This story takes place in the year 2035 where Lunar Industries has found an answer to Earth’s energy crises in the form of a “Helium-3” on the Moon. The idea is to have a person on the Moon harvest this Helium-3’s energy and send it back to earth in batches. Once every 3 years, the operator on the Moon is replaced with another. Without further ado, here’s the plot and ending of the film Moon explained.

I’ll cut straight to the chase. Lunar Industries is basically evil and instead of training more astronauts and sending one over every 3 years, they simply have a cloning unit on the Moon. While the original Sam might have started his work on the Moon, he is never seen in the movie. It looks like the lifespan of a clone is around 3 years, which is why they are made to believe that they are on a 3-year mission. Either that, or all the work around the radioactive material causes them to get sick after 3 years. Once the 3-year period is completed, the clones are told that they will be sent into hibernation and back to Earth. But instead, they are simply incinerated and gotten rid of and another Sam is instated by GERTY, who is the AI based operating system.

This cycle of Sams has been happening over a period of 15 years. The movie opens by following one such clone, mathematically, the 5th. But for convenience, we’ll call him Sam1. Sam1 has 2 weeks of time remaining on the Moon and is excited to go back home. Sam1 hallucinates and ends up crashing his rover and goes unconscious.

Sam1 is presumed dead and GERTY revives the next Sam, Sam2. Usually, when a clone is activated, they are told that they have just been in an accident. They are then briefed that their 3-year mission has just begun. Sam2 is told the same thing. As the audience, we are made to confuse Sam1 with Sam2. Sam1 is still in the rover and is going to complete 3 years of service.

Sam2 is told that there are some rescuers coming and that he has to stay indoors. Sam2 doesn’t know about Sam1 but still suspects something is off. He heads outside and finds Sam1’s rover with Sam1 inside who he brings back to the station. While at this point it appears that one Sam is a clone and the other is real, the truth is that they are both clones. Sam1 is now falling apart because his 3-year lifespan is coming to a close.

The Truth About Making A Live Call To Earth

Now, all clones are told that no live signal can reach the Moon and only recordings sent by his family can be watched. However, Sam2 overhears GERTY having a live conversation so he smells something fishy. Sam1 and Sam2 work together to find why they can’t get any signal out. They locate a jammer tower that stops all out bound signals. Sam1 drives past this point to call home. He finds out that his baby daughter is actually 15 years old and his wife has passed away.

On confronting, GERTY shows videos of earlier Sam-clones getting incinerated in the “hibernation” chamber. The two Sams see the chamber with racks of sleeping clones. The “rescue” team is sure to kill both Sam1 and Sam2 if they are caught together. Sam2 wants Sam1 to escape to Earth using the pod, Sam1 is far too close to dying so he asks Sam2 to escape instead.

Sam2 puts Sam1 in the rover so that the “rescue” team doesn’t suspect anything. GERTY helps out, because he’s an AI with a good heart. GERTY asks for Sam2 to reset him so that whoever goes through the logs will not find the sneaky-sneaky that they have been up to. GERTY prepares the next clone Sam3 while Sam2 escapes. Sam1 stays alive long enough to watch Sam2’s pod escape to Earth. As the pod enters Earth, we are told via news reports that Sam2 wreaks havoc. He exposes the clone program and how Lunar Industries has been insidious. Effectively, it looks like the company is now down and out. What they don’t mention in the movie is if Sam2 would have 3 years to live on Earth after which he will puke blood, loose his teeth, keel over and die. Even if he doesn’t, what happens to the other sleeping clones on the Moon.

What were your thoughts about the movie Moon? Drop a comment below! If you liked the film, do check out I Am Mother on Netflix.