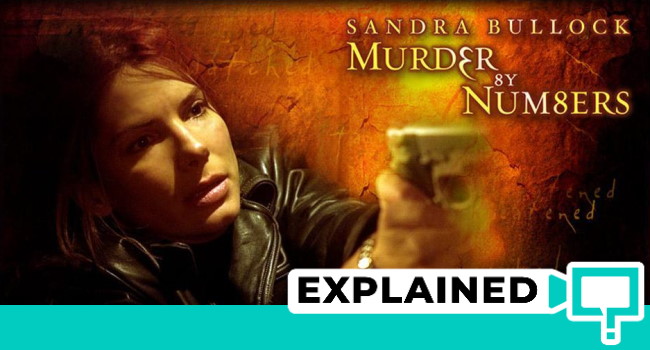 Murder By Numbers is the story of a couple of juvenile murderers. I say that like it’s a very common thing, while the movie is not disturbing, the concept is. They want to prove that they are above the law when it comes to getting away with murder. They are also messed up kids who have mommy issues. Obviously the law doesn’t back down either and are doing their research to nail the murderers. As one can expect, the film is a tug-of-war between the various characters involved in the murder. It’s a tight plot and keeps your attention to the very end. The non-linear storytelling is beautifully executed. Here is Murder By Numbers explained.

Richard Haywood (Ryan Gosling from Stay) and Justin Pendleton (Michael Pitt from I Origins) are two friends who plan and commit the murder to prove that they are smart enough to get away with it. Richard’s parents are quite influential and he’s a spoilt brat looking for a kill. Justin is pretty much the same but no details of his parents are given in the movie. While Richard and Justin are friends in secret, they display a clear sense of hatred for eachother at school. They do this to ensure the cops can’t connect them and hence decypher the murder.

Olivia, a random girl picked to ensure there is no trail leading back to the killers. There is no back-story for her.

Ray Feathers, the guy who supplies weed to Richard. He’s also the janitor at school. Richard and Justin plan and pin the murder on on Ray. 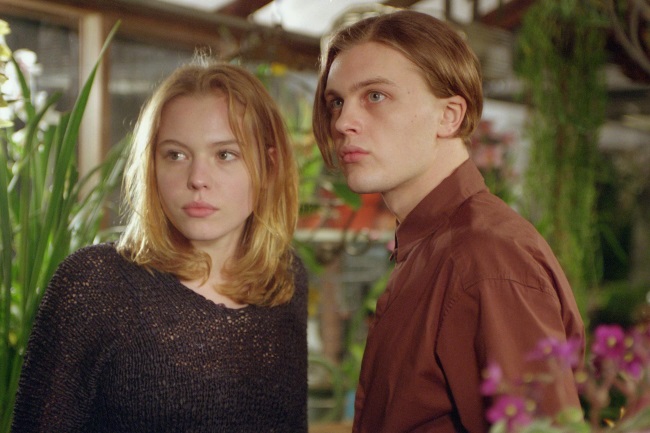 Here’s the plot laid down in chronological order. This helps explain it easily.

Carl Hudson turns out to be an abusive husband and has sent Jessica to the hospital a couple of times.

Jessica stands up to Carl, he stabs her 17 times with a knife and dumps her on the road side.

Jessica survives, changes her name to Cassie and becomes a cop. However, Cassie sees Carl in every person and is apprehensive about men in general. Years pass.

Richard and Justin, two high school kids, plan a murder. They drive around and select a suitable victim.

Richard registers a complaint about his shoes getting stolen from his locker in school. He makes a hue and cry about it.

Richard steals carpet fibers from Ray’s house when he goes to get weed from Ray. Ray has a baboon, Richard steals a strand of its hair.

On the day of the murder, Richard calls for a group study at home from 7PM onwards.

At 3:30PM that day, he wears his boots (registered missing) and goes to Olivia’s (victim) house. The sprinklers set at Olivia’s place go off at 3:30PM and wet Richards boots (this is unplanned). This leaves muddy footprints near the window of Olivia’s house as Richard enters and waits.

Olivia comes home, Richard subdues her with a hammer and puts her in the trunk of his car. He breaks the clock in the house and changes the time to 9:27. He takes Olivia back to his basement and ties her up.

Later in the eve, Richard sits with his study group as planned from 7PM onwards.

Justin goes home in the eve and tells his mom that he will be upstairs doing school work. He locks his door and leaves from his window.

Justin has dinner at a restaurant, he has Caviar for dinner and leaves for Richard’s home.

During the group study, Richard goes out to get money from the ATM for pizza.

Richard gets the money, meets with Justin at his home’s basement. Justin has second thoughts about killing Olivia (victim). Richard says Justin is all talk and no action. Justin takes the gloves from Richard and kills Olivia. Richard hands Justin the boots and goes back to his study group. All of this takes only 10min after the ATM visit.

Justin takes Richards boots, walks with Olivia’s body dumps it in the woods. He stabs her with a screwdriver and cuts off one of her fingers. This makes him nauseated and ends up vomiting somewhere nearby. Justin puts the fibers and hair on the body and leaves.

Cassie and Sam are informed of the dead body (this is how the film begins). A zoom shot shows the coloured fibers of the carpet and hair strand.

Cassie locates the vomit spot and Sam collects some for analysis.

The cops go to the house of the victim – notice the clock showing 9:27 so they assume that to be the time of the murder. They notice the boot marks coming in from the window.

The forensic department identifies the fabric strands to be generic distribution to multiple brands. The hair is identified to be baboon hair. 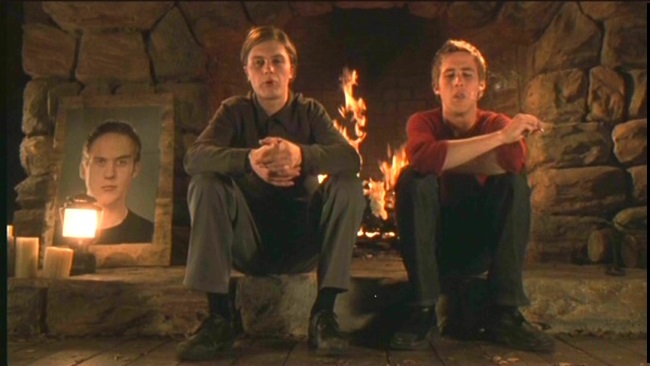 The boot mark they recover is traced back to a shoe purchased by Richard so Cassie and Sam go to the school to meet him.

Initial cop visit scares Ray because he thinks they are busting the drug dealing and so makes a run for it.

Sam and Cassie have a talk with Richard where they ask him what he was doing on the night of the murder, about the shoes, etc. Richard obviously has an alibi – the study group (7PM to 3AM) and him stepping out to get cash from the ATM. Cassie suspects Richard.

Lisa is a girl from class who is interested in Justin. She wants him helping her out with her Physics. Justin dates her. Richard doesn’t like this. So he seduces and has sex with Lisa and tapes it. Richard proves to Justin she’s just another girl who is using him.

The vomit analysis initially reveals partially digested fish eggs. Scanning the restaurants for Richard’s visit leads nowhere. But one of the restaurant managers mentions Justin coming over one night to order Caviar and leaving by 9PM.

Cassie’s attention turns to Justin and suspects the link between Richard and Justin. She questions Justin.

Ray is not home because Richard asks Ray to hide in his trailer. Ray still thinks they are busting him for the marijuana.

Richard kills Ray and makes it look like suicide.

Carrie is now extremely convinced that Richard and Justin are somehow connected to this. She steals Richards garbage to get some evidence and perhaps collect DNA.

Forensics team comes back stating the vomit analysis happens to contain some blood.

Richard is pissed when he gets to know that Justin happened to puke when dumping the body. There is a general bromance here between them. 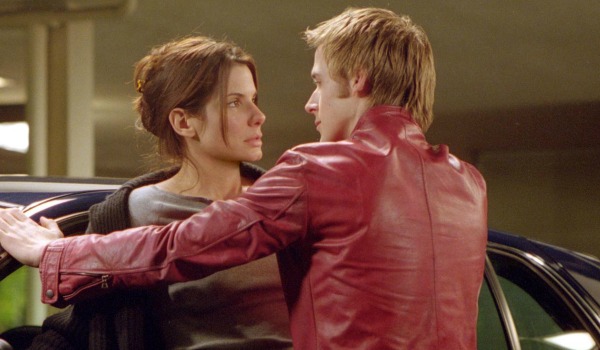 Cassie gets caught trying to spy on Richard. Richard intimidates her and she opens her car door on him by mistake.

Richard raises it with his parents and they call Rod. Rod gets Cassie off the case. Cassie convinces Sam to tell Rod to keep the case open. Sam does.

Sam talks to Lisa at school. She mentions the recording.

Blood in the vomit matches Justin’s DNA. Cops get Richard and Justin in two rooms simultaneously and confront them. They try to get one of them to confess by turning them on each other using Lisa and the recording (details of the murder are shown as flashback now). It doesn’t work as Richard’s attorney shows up and interrupts.

Turning On One Another

Richard and Justin start suspecting each other.

Sam finds out about Carl Hudson and Cassie tells Sam about Carl and her past. Sam urges Cassie to go for Carl’s parole hearing.

Richard calls the cops and partially admits to the crime. Cops get warrants for Justin and Richard but they are both missing.

Cassie notices that Richard’s place has a peep hole and that’s how he’s made the recording with Lisa.

Lisa calls Cassie and gives her the location of the two boys.

Richard gives Justin a gun, both point guns to their heads and plan to fire on 3. Now that they are caught, death is the only way out. 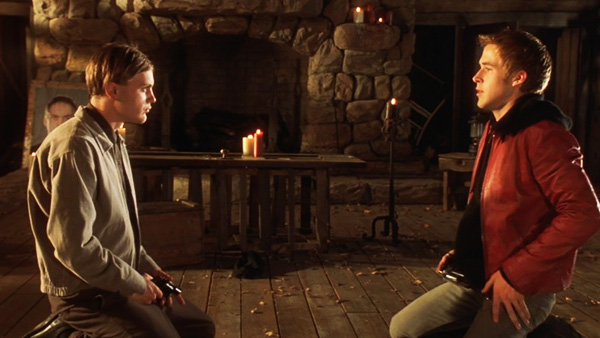 There are no bullets in Richard’s gun. He plans to get Justin to kill himself and get away with the murder as a mere accomplice. Justin guesses this and threatens to kill Richard and then himself.

Cassie intervenes, Justin drops his gun and goes to her. Richard picks up the gun and fires at Cassie, Justin takes her bullet. Richard heads upstairs. Cassie follows.

Richard fires his last bullet, making Cassie think he’s shot himself. Richard attacks from behind and they fight on the broken balcony.

Cassie sees the strangle marks on her neck and notices it’s not the same as the one on the victim. Richard’s ring’s marks were missing on the victim. She suspects Justin now.

Justin believes her and confesses. He says he had to show Richard that he was “free” enough to do the killing. The confession helps Cassie incarcerate Justin. Justin is arrested.

The fact that there is no actual recording of the killing or a recording of Justin’s confession could potentially cause Justin to simply retract his statement. No matter what, there needs to be a trial and in that, there would not be enough evidence to prove Justin is guilty.

The film ends with Cassie – Jessica Hudson going to the parole hearing to face her past and get over it.