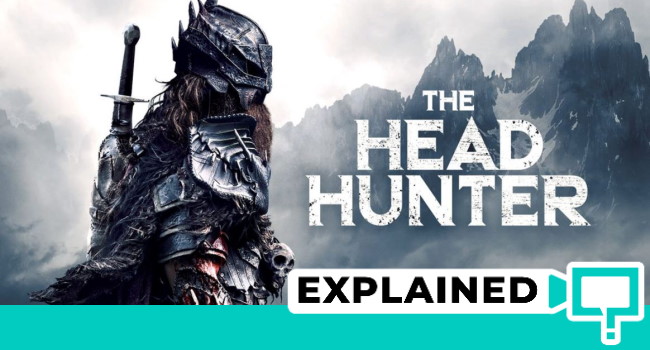 The Head Hunter is a brilliant visual narration of a solo warrior seeking revenge. The 2019 film is directed by Jordan Downey and is a cinematic spectacle created in a tiny budget of $30,000. This is in the league of Shane Carruth, who gave us films like Primer ($7000) and Upstream Color ($50,000). Actor Christopher Rygh does a great job of expressing pain, both physically and mentally, as he decapitates monsters in search of the one that killed his daughter. The cinematography makes you feel like you are in the middle of a Skyrim cut-scene. Since there is only one character, the movie is bound to be a little slow, so you’ll have to endure that. Thanks for the recommendation, Jess. Here’s the plot and ending of the 2019 film The Head Hunter explained, spoilers ahead.

You can rent or buy The Head Hunter by clicking below:

It’s fantastic how the movie lets your mind imagine the brutality of each monster battle. Lack of funds didn’t allow for elaborate CGI, so the filmmaker decided to show us only the aftermath of each fight. The makeup and the acting do the rest to portray the extent of the brutality.

Why is the Warrior killing monsters?

The Warrior lives alone hunting monsters. He decapitates them and keeps the head impaled on his wall as trophies. And now you know why the movie gets its name. While he has collected numerous heads, he still waits to run into the monster that once killed his daughter. His life is run by his quest for vengeance.

The Head Hunter: What is that Grey Fluid in the Jars?

Through the help of ancient scriptures, the Warrior has learned to produce a substance that has extraordinary healing abilities. He uses this to treat the many gory gashes that he receives from the monsters he battles. Unknown to him, the fluid also has the power to bring the dead back to life.

Finally, the monster that killed his daughter returns, and in an unseen epic battle, the Warrior defeats and beheads the beast. He’s too worn down by the fighting and puts away the skewering of the head for later. The Warrior heals from his wounds and proceeds to his daughter’s grave to tell her that she has been avenged, that she can now rest easy. 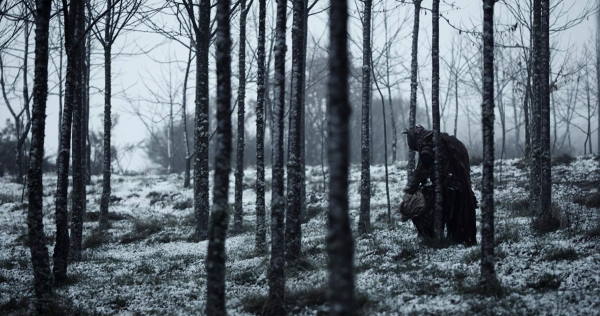 Because of a carelessly placed jar of grey healing substance by an open window, the fluid falls on the head of the troll, bringing it back to life. It, well, heads out looking for a possible body to connect to. The evil, ironic turn of events leads to the monster attaching itself to the remains of the Warrior’s daughter. Now, not only does he have to go kill it again, but he also has to endure the pain of separating his daughter’s headless skeleton from the reanimated monster. To add to the agony, the monster conjures up words in the voice of his dead daughter. He repeatedly stabs the head and kills it, or so he thinks.

There is a scene where the Warrior dabs some fluid on a dead spider, which springs back to life. He promptly squishes it and walks away. But we are shown the spider getting up again. The mystical substance has the power of eternal life. This also means that the monster’s head is also not dead. But our warrior friend doesn’t know this. He believes it’s a one-time back-to-life thing.

What happens to the Warrior at the end of the film?

Well, in an unfair turn of events, the monster head that is still alive (as seen in the gif above) sneaks up on the Warrior and kills him. It beheads him and inserts its spine into his body. We are not shown how exactly a head alone could take down this immense Warrior who slays monsters for a living. But consider this:

I think it had a jump on our Warrior hero and strangled him. After that, it was the matter of taking control of his unconscious body and using his blade to decapitate his own head. We see the monster impale head of the Warrior on his own wall of trophies as it walks away, claiming his body.

Did the Warrior die in the end of The Head Hunter?

Remember, the grey substance gives eternal life, and the Warrior has used it more than anyone else. Clearly, he is immortal, but what good is immortality if your head is skewered on a wall-mounted stake? The last scene showing his dead eyes was a pretty dark way to the end of the film. I’m happy there were no corny elements of his eyes blinking or moving.

What’s the significance of the Arrow Head?

It’s an arrowhead from the last Radian City. They said that these arrows can carry souls to the afterlife. I don’t believe in it, but here you go.

While he initially doesn’t believe in this, thinking that it is all over, he shoots the arrowhead into the distance. This directly hits the decapitated head of another slain monster. Now, it would just be extremely twisted if his daughter resurrects as a monster. But we aren’t shown what the effect of the arrowhead on the carcass is. But we do know that this head doesn’t kill the Warrior.