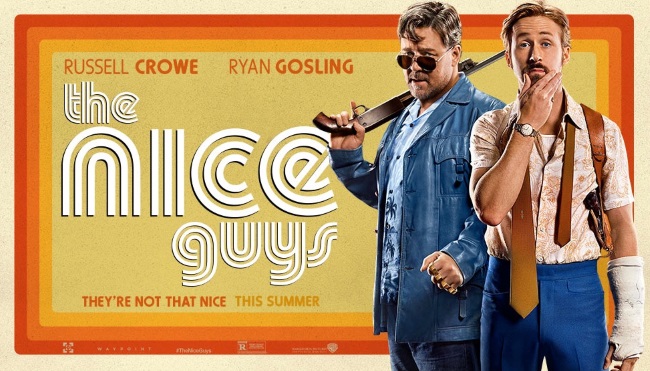 The Nice Guys is an action comedy thriller crime mystery crazy funny mad film. Yeah, it’s got all of that, I checked. It has Russell Crowe and Ryan Gosling in starring unique roles. It is a murder mystery which has a girl missing, and different groups of folks searching for her. What makes it a good watch is the erratic humour that the movie throws at you when you are least expecting it. Is it so funny that you lose your breath laughing? No, it’s not. But the placement of the humour is without warning and does not mess around with the pace of the film. Too bad the film didn’t make a lot of money. But if you haven’t watched it, give it a go. It’s fun.

Now, getting to the details. Though it’s not a complicated plot, you can get a little lost given the number of characters in it. So let’s take it sequentially, from the top. Spoilers ahead.

The film is set in the 70’s. Detroit is the automotive capital of the US and the world. Judith Kutne (Kim Basinger) is a someone at the top in the US Department of Justice. She is the villain but not disclosed until much later in the film. Judith is illegally helping the Auto Industry in Detroit to avoid a new technology – the catalytic converter. She’s probably getting bribed to provide the help to avoid it. The catalytic converter is possibly an added expense to the manufacturers. Judith has a daughter, an estranged daughter – Amelia (Margaret Qualley).

Misty Mountains’ old aunt feels that her niece is still alive because she saw her niece at the window of her house a day after the news of her death. The old aunt approaches detective Holland March (Ryan Gosling) to investigate. In his investigation, he finds the missing link to be Amelia and tries to locate her.

The rest of the film is a cat and mouse chase. Given Amelia has not been found for long and the risk of the film being released has increased, Judith decides to send a hitman, John Boy, to find and kill her daughter and anyone trying to get their hands on the film. Amelia ends up with Holland and Jackson by stroke of luck. She tells them what is in the film and why everyone is after it.

Tally, Judith’s assistant is evil too. Holland has a crush on Tally. She uses this to get Holland and Jackson take a suitcase with $100,000 someplace. Holland falls asleep on the wheel. The case opens up to reveal that the currency is fake. In the meanwhile, Judith has sent John Boy to Holland’s place where Amelia is. In the confusion of the shootout at Holland’s place, Amelia doesn’t trust anyone and makes a run for it. However, she (unluckily) ends up asking for help from John Boy (who’s driving away) and gets shot dead.

They figure out that the Old Aunt of Misty Mountains was actually seeing a footage of her through the window. So they go to her place to look for the film. They also figure out that a person named Chet had also worked on the film with Amelia. Chet is the projectionist for the upcoming LA Auto Show. They realize that he’s going to play the film at the LA Auto Show for everyone to see.

Lots of gunshots later, the film does get projected. Everyone sees it. The cops get to know. The secret is out. Judith gets arrested for what she’s done. Judith doesn’t care. She feels that what she did was for the good of Detroit, for America. The auto companies aren’t charged as there is not enough evidence. Holland and Jackson form a new detective company – The Nice Guys