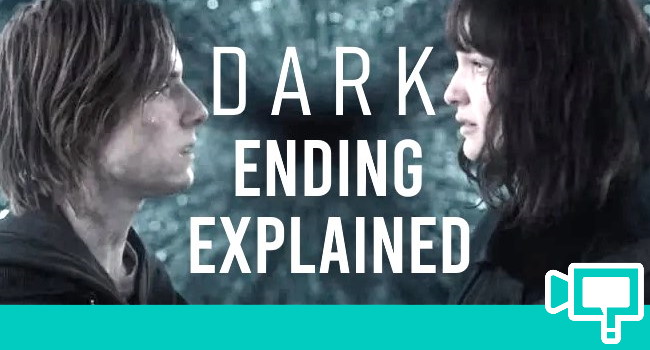 In this article, I’m going to talk specifically about the ending of the Netflix series DARK. My primary focus will be on summarizing the critical elements that connect to the ending of DARK. So if you are still watching the series, please do not read further, massive spoilers ahead. This is Barry, welcome to my site, and here is the DARK series ending explained.

You’ll find this other link helpful in understanding the Netflix DARK Series:

Here are links to the key aspects to understand the ending of the series Dark:

DARK Series: How many Worlds are there in total?

There are three worlds in total.

Adam’s and Eve’s Knotted Worlds are born from a third Origin World. 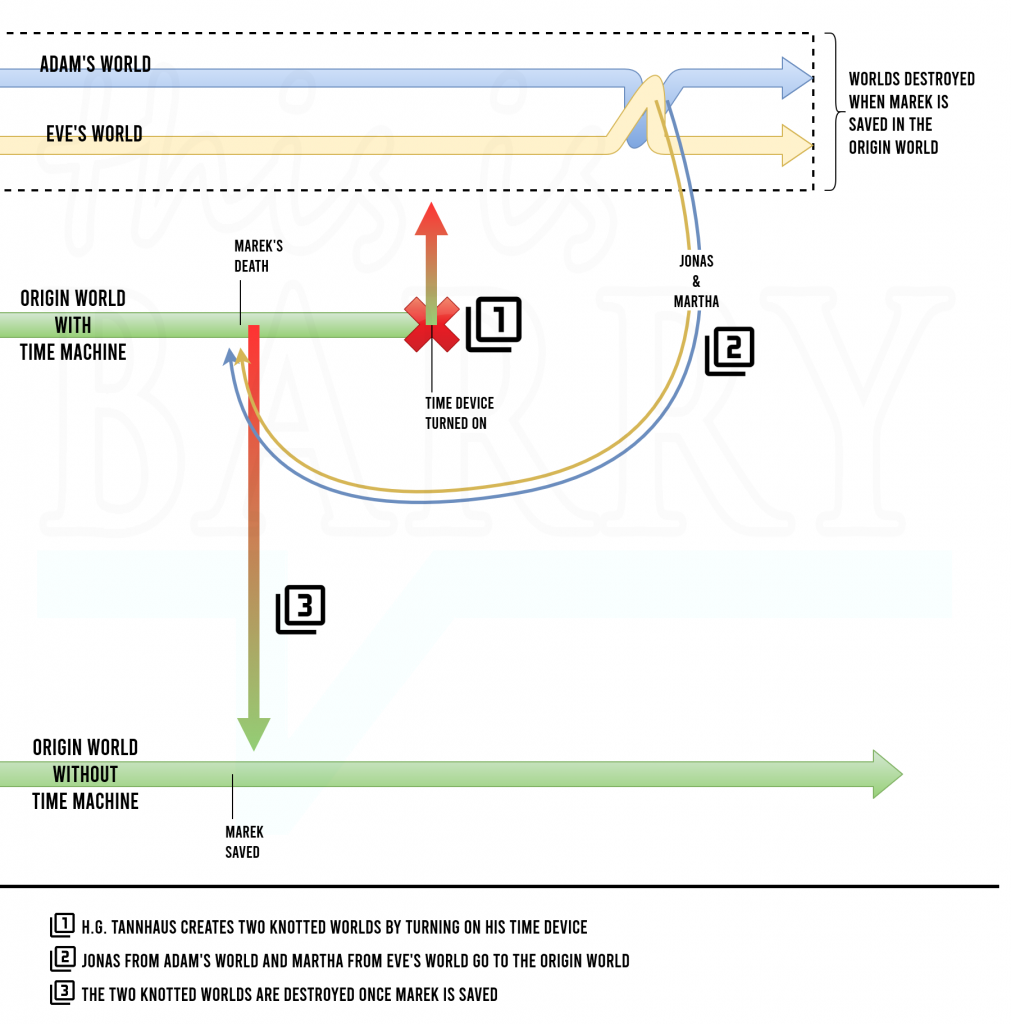 DARK: What is the Origin World? How did Adam’s and Eve’s Worlds get created?

In 1971, H.G. Tannhaus has an argument with his son, Marek. Because of this, Marek leaves with his wife and baby on a rainy night. Thanks to visibility issues they drive over a broken bridge and the three of them die. H.G. Tannhaus is unable to deal with their deaths and obsesses over the idea of creating a time device that he can use to go back and save them. He spends 15 years building it. Finally, in 1986, he completes this device and turns it on.

The ending of DARK reveals that H.G. Tannhaus ends up destroying his World with his machine and giving birth to two Knotted Worlds – Adam’s and Eve’s. This is not the case of one timeline splitting into two. This is one Universe being replaced by two other Universes with both pasts and futures differing from the Origin Universe. The entire DARK series is based on two temporal Worlds that are a byproduct of a quantum experiment conducted by one man in the Origin World.

What is Quantum Entanglement, how is Jonas dead and alive?

Here’s how it works in DARK. Two concepts need to be understood – Bootstrap Paradox and Quantum Entanglement.

The first one is the Bootstrap Paradox. This is when an object or a person seemingly comes into existence because of time-travel. The example of this in the series is the Briefcase Time-Machine of Adam’s World. Examples of bootstrapped people are Elisabeth and Charlotte, who are each other’s mothers. This is not the result of Quantum Entanglement. No matter how convoluted this might seem, there is only one Charlotte and one Elisabeth in one world.

Let’s look at the incident where Jonas is in his house looking at the dead Martha from his World moments before the apocalypse. We suddenly have Martha from Eve’s World showing up and taking Jonas away. Up until that moment, we know that Jonas grows old to eventually become Adam, and he has never visited the other World. But now you have Jonas not only travelling to Eve’s World but sleeping with Martha and eventually dying. How does this happen? The answer to this is Quantum Entanglement. The various paths that Jonas takes all exist simultaneously. So one Jonas goes on to become Adam, and another goes with Martha has sex with her and is killed off. The same thing happens with Martha too, one Martha gets taken and killed by Adam, while another shoots Jonas and eventually becomes Eve. 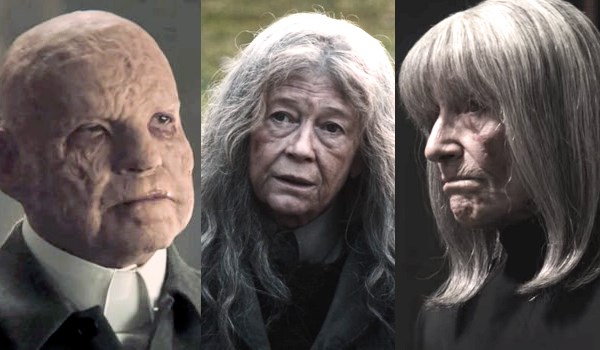 Adam wants to destroy the Knot and both Worlds. That’s what he really wants but he lies to most people he came across because he didn’t want anyone (including his younger selves) to interfere with his plans. His master plan was to wait until Martha got pregnant, kidnap her, and use the power of both worlds to kill her and her unborn. At the end of DARK, we are shown that Adam successfully kills Martha and her unborn. But thanks to Quantum Entanglement, at the point of the apocalypse in 2020, another Martha comes to existence who still bears Jonas’ child and grows old to become Eve. Adam’s plan fails.

DARK Ending: What does Eve want?

Eve wants to preserve the Knot and both Worlds. She goes with the principle that, no matter how convoluted the Knot made it for certain people, the two Worlds otherwise exists and should not be deleted. She, too, lies to most people (including her younger selves) to ensure that no one ends up destroying both Worlds. Her plan doesn’t work out either.

DARK Ending: What does Claudia want?

Claudia wants to destroy both Adam’s and Eve’s Worlds and save the Origin World. She knows more about the nature of the two worlds than Adam or Eve. Claudia from Adam’s World kills and takes the time-machine from Claudia from Eve’s World. Using this, she travels extensively through time and the two Worlds to find out that both the Worlds were ulcers growing from a third Origin World. She traces the first explosion in her Power Plant back in 1986 to have a source outside of both Adam’s and Eve’s World, H.G. Tannhaus’ time device in an Origin World.

How did Claudia find out about the Origin World?

Over decades, Claudia puts together the relationship-tree of people that belong to both Worlds. She realizes that many people have ancestry that points back to themselves. For example, all of the Nielsens exist because of their own family. Martha gives birth to The Unknown who fathers Tronte with Agnes. They exist as the result of a Bootstrap Paradox. Claudia notices that her daughter Regina is not part of a paradox. In her quest to save Regina, she stumbles upon a third world, the Origin World. A world that was destroyed by H.G. Tannhaus to give birth to the two Knotted Worlds.

DARK: Plot-Hole: How Claudia knows so much?

Fundamentally, I find this incomplete on the part of the series. Claudia belonged to Adam’s World. With the spherical time-machine from Eve’s World, she could travel through time and between both worlds. There is no way Claudia could access the Origin World. And furthermore, she couldn’t know the details of dates and events of the Origin World either – that from 1971 to 1986 H.G. Tannhaus built a faulty time device. And that his faulty time machine destroyed his world and created two knotted ones. She also somehow knows that the date that Jonas and Martha need to travel back to is 1986. All Claudia could know about the event in 1986 is the leak that was triggered in the Power Plant. Sadly, DARK ended with this gaping void and didn’t give much closure to Claudia’s path. Do drop a comment if you have thoughts around this. 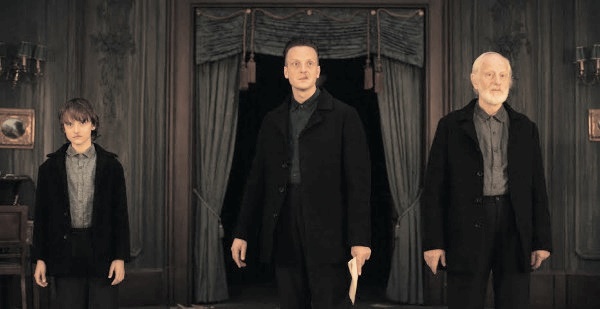 Who are the three people child, man and the aged?

The child, man and the aged are same person from three different times. They don’t have a name and series calls them The Unknown. He is the son born to Martha and Jonas. Apart from killing a few people who could threaten the existence of the Knot between Adam’s and Eve’s Worlds, The Unknown also fathers Tronte Neilson in both the Worlds – here’s more details on how we know this.

The Unknown is responsible for the Power Plant leak in both Adam’s and Eve’s Worlds. Remember they steal a manual from Claudia’s office in Adam’s World. The manual is the “Volume Control Manual” which generally has details about removing contaminants from the reactor – Chemical Volume & Control Manual. Either both Power Plants are identical, or they steal this manual from Eve’s World’s Power Plant too [off screen]. Using this information, they now travel back to 1986 to create the leak, which is what we see stored in the yellow canisters. The Unknowns create the leak that gives birth to the God Particle. Years later, this God Particle triggers the apocalypse in both Worlds.

What happens at the end of the DARK Series?

Claudia explains to Adam that H.G. Tannhaus (in the Origin World) destroyed his world by mistake. That Adam can use the point of time in the apocalypse, where time stands still for an instant, and give his younger self the ability to take a new path – go to the Origin World. But this would be possible only if Jonas and Martha did it together, it cannot be one World’s decision. Adam travels back to the point of the apocalypse (2020) and leaves with Jonas and travels back in time moments before the apocalypse in Eve’s world (2019). Jonas intercepts Martha’s meeting with Old-Magnus and Old-Franziska and takes her to 1986, just before the explosion at the Power Plant. They use the space-time rift caused by the explosion to travel to the Origin World.

What is that place that looked like the Matrix at the end of DARK?

This place is in space-time between the Origin World and the Knotted Worlds. They are at the beginning of their two Worlds and at the end of the Origin World. I’m not sure what the implication of this scene is, especially when they see their younger selves. Looks like this was destined to happen and shows that the connection between Martha and Jonas always existed. From here, Martha and Jonas use the time machine to travel to 1971 to save the Origin world.

The ending of the DARK series shows us that Jonas and Martha successfully stop Marek from using that broken bridge in 1971 in the Origin World. This results in him and his family not dying. Marek goes back to H.G. Tannhaus’ home. Given H.G. Tannhaus doesn’t lose his son and family, he doesn’t obsess over time-travel and never builds the time device. 1986 comes and goes without any incident that destroys the Origin World. But as a result, both Adam’s and Eve’s world are destroyed, and everyone in it is erased from existence.

At the moment of the apocalypse, we have already two Jonas. One never goes to Eve’s world and grows up to be Adam. The other goes to Eve’s World, sleeps with Martha and is eventually killed. Because of Quantum Entanglement, we’re told that both Jonas can co-exist in the same timeline. The real problem kicks in when Adam shows up at that same instance of the apocalypse and takes Jonas down a third path. The third path destroys the Knotted Worlds. And this is a problem because only if the Worlds are not destroyed can there be an Adam to help Jonas end the Worlds. You see how that’s a problem? By destroying the Worlds, Jonas also removed the possibility of there being an Adam. Then who helps Jonas kill the Worlds? If this is also attributed to Quantum Entanglement, then this needs to extend to the Origin World. Marek should be both dead and alive, which then means the Time Device in the Origin World also needs to be both created and not. We are shown no such thing. This is a classic Grandfather Paradox in the Origin World especially because there is no implication of Quantum Superposition. Many time-travel movies have fallen prey to this in the past. Slick films like Predestination or Primer don’t dabble in this plot-hole, but DARK does.

As the series DARK comes to a end in Regina’s house in the Origin World. We don’t know exactly when but this is possibly around early 2000s.

This Origin world will now be a normal one with no time-travelling or where people and objects will be bootstrapped. To see what the family-tree looks like in the Origin World, go here – DARK Series Family Tree.