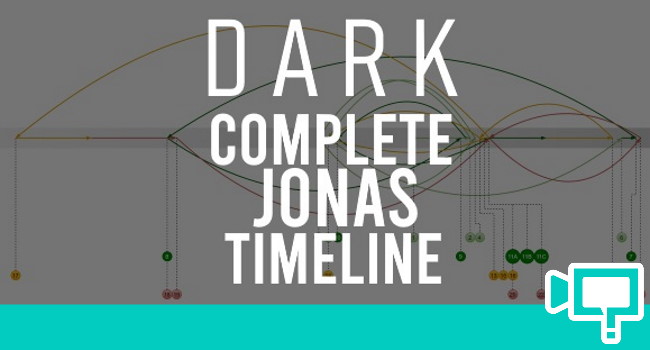 In this article, I have summarized the complete timeline of Jonas from the Netflix series DARK. I have created a detailed timeline diagram that shows Jonas becoming a time traveller, then the Stranger and ultimately, Adam. I’ve also tried to capture the three instances of Jonas created because of Quantum Entanglement but have not crowed the diagram with that information. Each of the encircled numbers in the illustration maps to the description in the below text. This is Barry, welcome to my site and here’s the complete Jonas timeline in Dark with a detailed Timeline Diagram.

Other links on Netflix DARK you will find useful:

Let’s now follow the entire life of Jonas from his birth to him ending up as Adam as shown in the Dark Jonas Timeline Diagram above.

(3) Jonas arrives on 8 Nov 1986 using the Cave to verify Mikkel is actually there, and he is indeed his father.

(4) Jonas gets back on the 9 Nov 2019 through the Cave. He spends a few days preparing for his journey again through time. On 12 Nov 2019, Jonas uses the Cave to go back in time. He wants to bring back Mikkel and erase himself.

(5) On 12 Nov 1986, Jonas arrives and is kidnapped by Helge and put in the experiment room. The Stranger meets Jonas and reveals that he’s his older self.

(7) After spending months in the future, Jonas stabilizes the God Particle at the Power Plant. He is almost hung to death by an older Elisabeth but is spared when she finds out who he is. Jonas develops a scar on his neck because of this event. We’ll refer to him as Scarred-Jonas. In Feb 2053, Silja helps Scarred-Jonas use the stabilized God Particle Orb.

(8) Scarred-Jonas arrives in the past on 24 Jun 1921. He’s taken to the headquarters of Sic Mundus where he meets Adam. Adam discloses that he an older version of Jonas, he shows him the same scar. Adam lies to Scarred-Jonas that he needs to go to save his father, stop him from committing suicide. Adam wants to ensure no one messes with the timeline until he can execute his plan to destroy both worlds.

(9) Scarred-Jonas meets his father on the 4 Nov 2019 only to realize that it is he who triggers the suicide. Old-Claudia shows up and convinces Scarred-Jonas and Michael that the past should not change at this point. She too intends to destroy both worlds but is not working with Adam. Scarred-Jonas leaves with Old-Claudia, who tells him to go to the past and meet her younger self.

(10) Scarred-Jonas lands up on 26 Jun 1987 to meet Young-Claudia who has just killed her father, Egon. The two of them leave.

(11) Scarred-Jonas returns to 27 Jun 2020, the day of the Apocalypse, with Young-Claudia and asks her to take Regina to the bunker. He then goes to his home where he meets Martha. They kiss. Adam (from the past) shows up and kills Martha.

Because of Quantum Entanglement, Jonas splits into three instances.

(11A) Scarred Jonas runs to his basement to escape the Apocalypse.

(11B) Scarred Jonas is taken by Eve’s Martha to the other world where he sleeps with her to conceive The Unknown and is eventually killed.

(11C) Scarred Jonas is taken by Adam (from the future) to Eve’s World and sends him on his way to save the Origin World.

The paths of Jonas in 11B and 11C erase Jonas from existence. We’ll now continue with the path of Jonas from 11A.

(12) Scarred-Jonas grows old in the post-apocalyptic world and becomes The Stranger. He works with Claudia and Young-Noah to stabilize the God Particle for time-travel. Finally, in the year 2052, The Stranger is sent back in time by Claudia.

(13) The Stranger arrives on 5 Nov 2019. He leaves Jonas the map to the passage in the Cave and a lamp. After this, he heads to the past to meet H.G. Tannhaus to get his portable time machine fixed.

(14) The Stranger makes a couple of trips between Nov 2019 and Nov 1986 to get the time machine fixed. He also steals some God Particles from the truck in 2019. On 12 Nov 1986, The Stranger meets and talks to Jonas locked in the experiment-room.

(15) The Stranger travels forward to 12 Nov 2019 and triggers the time-machine thinking he’s going to destroy the time passage in the Cave. Instead, he results in the creation of the wormhole.

(16) The Stranger stays on in 2019 up until 27 Jun 2020, the day of the Apocalypse. During his stay, he meets many of the people from Winden to disclose his real identity. Just before the Apocalypse, he uses a time machine and travels to the past with Bartosz, Magnus and Franziska.

(17) The Stranger arrives on 27 Jun 1888 by mistake due to a malfunction of the time machine. He is stuck there along with Bartosz, Magnus and Franziska. The grows old there and in-between he encounters Hannah who has travelled through time to meet him on Eve’s advice. The Stranger’s face has deformed by now thanks to all the radiation exposure and has lost his mind. Assuming Eve is trying to end his plans, The Deformed Stranger kills Hannah.

(18) On 24 Jun 1921 Adam meets Scarred-Jonas and sends him to the future to stop his dad from committing suicide, knowing very well that this trip is the reason that Michael will die.

(21) Adam travels to the future, possibly Jun 2053 and sets up the new headquarters of Sic Mundus in the destroyed Power Plant. Here he continues to operate and eventually traps and kills a pregnant Martha. His plan to destroy the worlds is unaccomplished despite killing Martha. Old Claudia appears and tells Adam that the only way is to save the Origin World. And that Adam needs to go back to the time of the Apocalypse and give Scarred-Jonas a third path, one that restores the Origin World but destroys both Adam’s and Eve’s Worlds.

(22) Adam arrives for the second time to the point of the Apocalypse, 27 Jun 2020, right after Martha has been shot. He takes Scarred-Jonas with him to Eve’s World moments before the Apocalypse. This goes back to the path of (11C). After this, Adam goes to Eve and makes peace. Jonas from the (11C) path, with the help of Eve’s World’s Martha, heads to the Origin World and saves it by preventing Marek from dying.