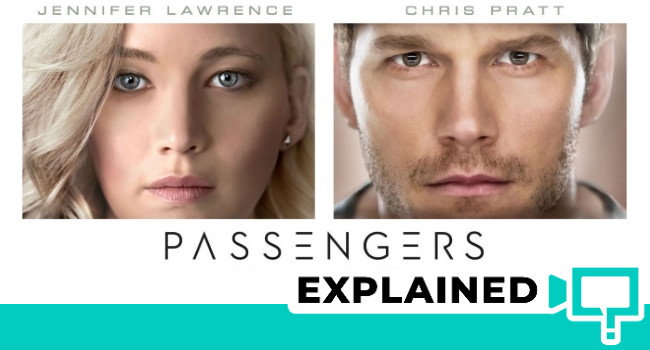 Passengers is another film explanation I got multiple requests for. I was putting away watching the movie as it didn’t look like it was going to blow my mind. Passengers is pretty average in terms of plot and character. It stars Jennifer Lawrence and Chris Pratt and is directed by Morten Tyldum. The visuals are pretty neat but the film doesn’t leave you with much to go home with. However, that said, this is not a Passengers film review. This is an explanation so let’s get to it, Passengers’ ending explained. Spoilers ahead.

You can watch the film by clicking below:

Honestly, there isn’t much to explain here in Passengers. The plot is quite straight forward. Earth, in the future, has figured other planets in the universe that can be inhabited. Humans have been opting to move away to these planets. The film is based on Starship Avalon which is transporting 5000 humans (colonists) and 258 crew members to a planet called Homestead 2. Sigh, humans have found a way to infest planets other than Earth too.

In the film Passengers, there is no catastrophe that has occurred on Earth unlike, say, Interstellar. No one is fleeing. These people have made a choice to relocate as they want to start a new life. Jim Preston (Chris) is one such mechanic who is looking to relocate to this new planet. Everyone on the ship is in hibernation. The duration of this journey is 120 years. So the idea is that everyone gets on board and sleeps for 120 years and wakes up on the other side at Homestead 2.

Unfortunately, after 30 years into the journey, a meteor hits the ship and damages the computer monitoring the fusion reactor of the ship. The ship is powered by nuclear fusion. This damage leads to further cascading damages to the other functions of the ship. One of the pods malfunctions. This is Jim’s pod. He is woken up.

He soon realizes that he got woken up 90 years too soon. He tries to send a message to Earth but they are so far from Earth that the message would take 55 years to get a response. He tries to check for other crew members who might be awake. Everyone is still asleep. He tries to figure some way to get back into hibernation but he can’t. People are put into the hibernation state on Earth and the pod just keeps them in that state. Jim meets Arthur (Michael Sheen), an android bartender. He is his only company. Over a year passes. Jim plans on ending his life.

Jim stumbles upon the pod of a woman, Aurora Lane, a writer. He reads up about her. He falls in love with her. Here’s the messed up part. Jim decides to wake her up too. He decides to do this because he is just too lonely. He wants company. But he decides to sacrifice Aurora’s life by waking her up. Once she’s up she can’t go back into hibernation either. He confesses to Arthur that he’s thinking about doing it. Jim knows he’s doing a terrible thing but he goes ahead and fries her pod’s timer chip and she wakes up. He asks Arthur to keep it a secret and Arthur agrees.

Aurora wakes up. She meets Jim. She goes through everything thing Jim goes through. She’s desperate to go back into hibernation. Jim tells her he’s been awake for a whole year and that he’s tried everything. Eventually, she starts to like Jim (he’s the only guy there, not many options in any case). They fall in love.

Passengers: Why does Arthur tell Aurora the secret?

On an evening, when on a date, Aurora mentions to Arthur that Jim and she don’t have any secrets. Arthur looks to Jim for confirmation. Now, this is an android looking to Jim for a confirmation. Jim says “Yep, you heard the lady”. Arthur takes this as confirmation that the matter about Jim waking up Aurora is no longer a secret. Arthur tells Aurora about Jim waking her up and how it was such a hard decision to make for Jim. Aurora gets super pissed. She stops talking to Jim.

Soon after, Chief Gus Mancuso’s (Laurence Fishburne) pod malfunctions and he wakes up. He is the chief deck officer and he has access to many of the places restricted to passengers. He enters the crew deck and realizes that many of the ship’s functions have been failing over the past two years. Soon after, the gravity field in the ship malfunctions and a swimming Aurora almost drowns. The Gravity gets auto-restored. Gus’s pod has been malfunctioning and has caused his health to deteriorate quite badly. He hands over his access key to Jim and Aurora and tells them to save the ship. He dies. Short cameo for Morpheus there.

Jim and Aurora locate the reactor room and find that the fusion reactor is highly unstable. The meteor has created a series of holes which has caused this. They replace the module of the computer that is monitoring the reactor. They need to vent the flames now. The exit hatch is stuck and the flames can’t be vented. Jim decides to go out to the vent hatch and open it manually while Aurora stays to vent the flames. She sees Jim leave and is terrified by the thought that if he dies then she will be all alone in the ship. This is a sudden turn of emotions here. Up until this point, she loathes him and holds him responsible for murdering her (well, technically murdering). This change in her feeling towards Jim could have been shown over a series of events rather than just one.

Jim leaves to the hatch. He manually opens it. But he needs to stay there to keep the hatch open. He uses a door as a shield and asks Aurora to vent the flames. She doesn’t want to because she might kill Jim in the process. But given the lives of 5000+ people at stake, she must. So she does. Jim survives the flames but his tether snaps. His suit has a hole in it. He’s losing temperature and oxygen. Aurora exits the ship to rescue him. Jim goes into cardiac arrest. She uses the Autodoc and resuscitates Jim. He comes back to life.

The ending of Passengers shows that 88 years have passed. It is time for arrival at Homestead 2. The crew wakes up. Out comes Andy Garcia. He’s the captain of the ship, Norris. A very odd cameo for him. Just that one scene. The reason is this. Apparently, there were a couple of alternate endings to this film.

The theatrical release has the ending of Passengers with the crew coming out to see that there is a house and this shows that Jim and Aurora lived a full life and died on the ship. The voice over is Aurora’s and is narrating her decision and experience.

The other Passengers ending that was thought of, was to extend this scene to show more of the leftovers of Jim’s and Aurora’s lives. I believe Andy would have had a longer cameo if that was part of the final edit.

There was yet another ending to Passengers which was part of an earlier script. Once Jim and Aurora fix up the reactor, the ship assumes that it is docking and releases all of the pods. The pods end up being released into open space with their occupants still in hibernation. Everyone floats away into open space to their deaths. Jim and Aurora are left alone on the ship. They use the gene bank which contains the sperm and ova of all of the passengers to repopulate the ship. A generation lives and ages on the ship and their children make it to Homestead 2. This ending would have raised more questions than it answered and was hence stashed.