After Get Out, Jordan Peele is back with his second film Us, a Psychological Thriller which delivers the right amount of chills down your spine. The cast includes Lupita Nyong’o in a fabulous role with supporting roles by Winston Duke and Elisabeth Moss (from The One I Love). Clearly, the film left a lot of open questions in viewers’ minds as I got plenty of requests to write up the Us movie’s plot analysis. So, not wasting anymore time, here’s the Us movie explained, spoilers ahead.

You can skip ahead to the following FAQs if you are looking for specific details related to the Us movie:

In Us, who are the Tethered (Shadows), and where do they come from?

The Tethered, also called the Shadows, are abandoned clones from a government project in secret tunnels across America. The project aimed at creating clones that were connected to the people through their souls. The purpose of this project was to use the clones to control people like puppets all over America. But the experiments failed, and the Tethered were abandoned underground in a vast network of tunnels.

Why are the Tethered dressed in Red in Us?

Well, two reasons. The symbol for Hands Across America was a string of red paper-men. But also, the T-Shirt that Adelaide was wearing when she was kidnapped was a Michael Jackson Thriller shirt where Michael wears a full red outfit. Do observe that the Shadows are wearing gloves only on one hand. Hee-hee, Aow! 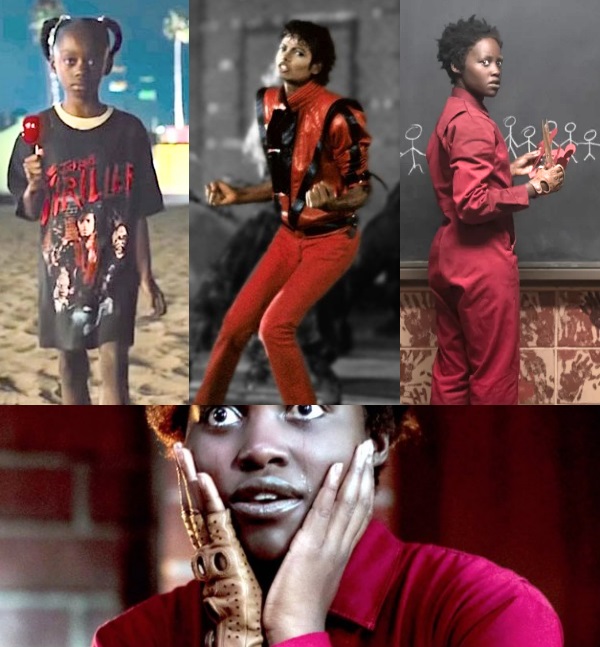 What’s with the Scissors that the Tethered are carrying in Us?

This goes back to the Hands Across America paper-men. The string of men is created by folding paper and then using scissors to cut out the shape. Also, just before Adelaide was kidnapped, she passes by a couple who are playing Rock Paper Scissors. And one of them says, “You keep doing scissors”. The Scissors are part of Adelaide’s subconscious and are used by her as the choice of weapon. By the way, the couple’s names are Nancy and Glen which are also the names of the central characters from Nightmare On Elm Street where antagonist uses a glove fitted with blades to kill – this is merely a forewarning. Also Johnny Depp played the role of Glen, who is also known for his role as Edward Scissorhands. Peele has thrown in a ton of tribute to other horror films in Us.

What’s with all the Rabbits in Us, the opening sequence?

Red explains that rabbits were part of the experiments and were also the food that the shadows live off. It’s easy to breed Rabbits as they reproduce real quick. They were are also perhaps part of the whole cloning process, used as test subjects. 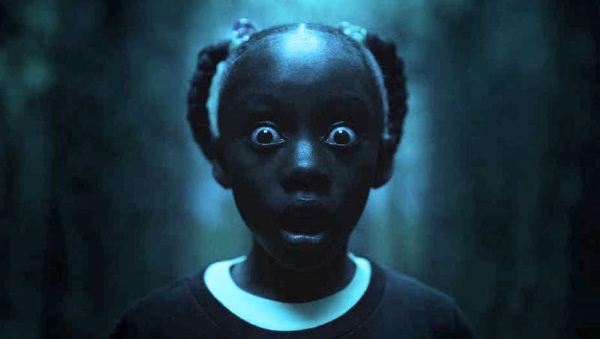 Us Movie Ending Explained – What is the plot twist?

The ending of the movie Us, reveals that Red is the real Adelaide. She was switched, and her Shadow took her place in the world above. This explains why Red is the only Tethered who could talk and thought differently, leading the revolt. Red’s voice is damaged because her double choked her, and for years she has not used her voice. This also clarifies why Adelaide, as a child, wasn’t able to talk after she was found at the beach – Shadows don’t know how to speak. Over time, Adelaide’s Shadow learns to speak and becomes a regular person capable of love and laughter and forgets that she is a clone.

Years after the switch, Adelaide is heading out with her family to Santa Cruze for a holiday. She doesn’t like the idea of going back to the beach as it gives her the creeps. They pass by a person who’s died, this is presumably the Jeremiah 11:11 guy who has been killed by his Shadow. Here’s more dope on the 11:11 dude. 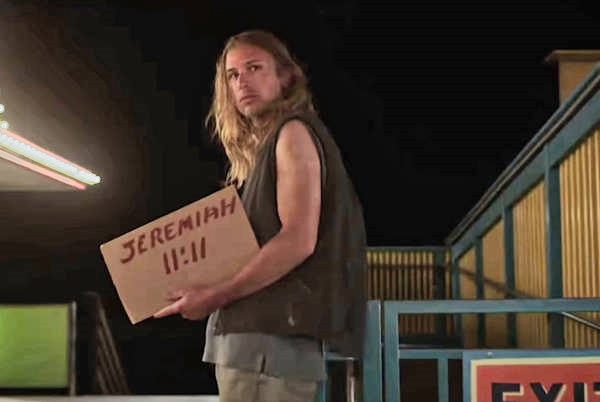 At the beach, Jason wanders off to use the bathroom, and Adelaide freaks out when he goes missing. Jason sees a guy on the beach with red overalls. This is presumably the Jeremiah guy’s Shadow who has taken his position in the human chain. Before anything nasty happens, Adelaide finds Jason and takes him home. Later, Adelaide tells Gabriel her story about the house of mirrors, but she’s misremembering it. She’s forgotten that she switched with the real Adelaide. Soon after, there’s a family in the driveway. Wilsons’ shadows have arrived to kill the Wilsons.

Red explains how everything they experienced was a cold and painful version of things that happen in the world above. The raw food that they had to eat. How Red had to marry Abraham because he was Gabriel’s Shadow. Umbrae is the Shadow of Zora but was an evil incarnate born laughing. Jason was a case of a c-section. While Adelaide had doctors do it for her, Red had to do it all on her own. Pluto is Jason’s Shadow – a growling, disfigured, evil version.

Now, there was nothing that robbed the tethered of free will. They could technically do whatever they wanted but didn’t because they never had. They have names that are not the same as the people in the world above. In spite of sharing the soul, they have already exhibited free will and have named themselves differently. Now Adelaide happens to get switched. Given Red is from the world above, she understood free will. Over time she shows the rest of the tethered that they too can decide for themselves. That they could live their own free lives and not merely mimic what the world above does. The untethering took time because as a group of clones, they needed to be taught how to act on their own free will.

The Wilsons are separated by their Tethers. Gabe kills his Shadow on the boat. After the Tylers (the neighbours) are killed by their shadows, the Wilsons regroup at the Tylers’ fancy house. It’s funny how the dying Kitty Tyler tries to get the virtual assistant, Ophelia, to call the police and instead it plays F*k the police by NWA. Haven’t we all had our own fun times repeating sentences to Siri, Alexa, Google or Cortana?

The Wilsons get the upper hand and kill the Shadows of the Tylers. They check the news to see that all over America, the tethered are butchering their counterparts and joining the human-chain.

Zora drives the Wilsons out, but her Shadow climbs on top of the car. Eventually, Zora swings the car flinging her Shadow into the woods where she’s impaled and killed. At the boardwalk, Jason’s Shadow has blocked the passage with Wilsons’ burning car. Before he can blow them up, Jason recollects that his Shadow mimics him. Jason backs away with his arms spread out, and his Shadow backs into the flames and burns. The experiment which planned to use the shadows to control the humans seems to be reversed here. Looks like it was not all a failed attempt. 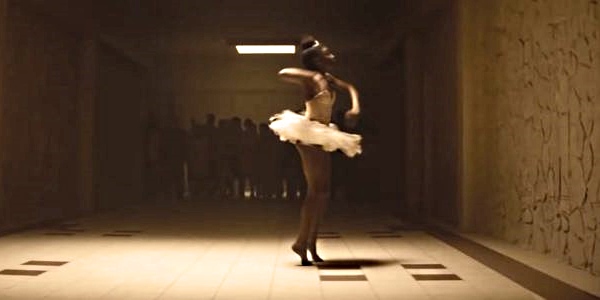 In this commotion, Jason is taken by Red and Adelaide pursues her. They head into the tunnels below the House of Mirrors where Red explains how she plotted the untethering. How the dance performance made the Tethered see that Red was different. That she would deliver them from their misery. Adelaide kills Red through sheer luck and finds Jason hidden in a locker. Red didn’t kill Jason immediately because she used him as bait to draw Adelaide underground to kill her.

Adelaide leaves with Jason but the events of the untethering bring back her memories. She realizes that she is actually the Shadow. Adelaide turns to her kid and smiles because she made it out alive and has a family and a life. Jason gives her a look of suspicion because he saw his mother murder multiple people in the course of one night. I believe the look is more one of disbelief. Jason does not know that his mother is a Shadow. 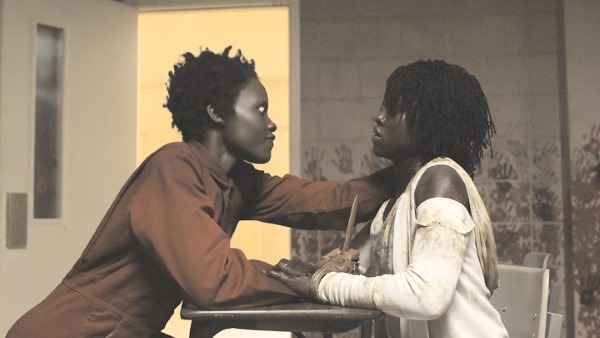 At the end of the Us movie, is Jason real, or is he a Tether too?

There are multiple theories on how Jason is actually a Tether because he’s awkward and can control his clone. But the reason why I feel he is not the Shadow is because Tethers don’t talk. There was never a mention of Jason having speech problems in the past. Besides, if something caused Jason to lose his speech in the past in Santa Cruze, Adelaide would never have agreed to holiday there.

Why do the Shadows form a Human Chain?

Hands Across America is an event that happened in the year 1986, where people across America paid a small sum of money to form a line of humans that was to span across the entire country. While the aim was to raise 100 million as a charity, the logistics got expensive, and only 15 million could go towards the charities. Also, the human line was not continuous. In the Us movie, the last nationwide event that Adelaide had seen before her abduction was Hands Across America. Years later, when she plans the untethering, she uses the human chain, this time successfully, to make a statement – it is the shadows’ time up here!