The first episode of the series Love, Death And Robots on Netflix is named Sonnie’s Edge. It’s a great opening to the series. The short story features brutal death matches between bio-beasts that are controlled by humans. Here’s Episode 1 of Love Death and Robots: Sonnie’s Edge’s ending explained.

A woman by the name Sonnie is kidnapped by an Estate gang and is sexually assaulted. But they don’t stop there, they cut her up pretty bad and break her skull. Sonnie’s two friends, Wes and Ivrina, find her busted up. While they are able to save her body they are unable to restore her fully thanks to the cracked skull. They transfer Sonnie’s mind and consciousness into a bio-beast by the name Khanivore. Sonnie’s body is remotely controlled by her through bioware processors spliced to the spine. So if the beast dies, Sonnie dies, because that’s where her mind exists. Nobody but the three of them knows of this fact. 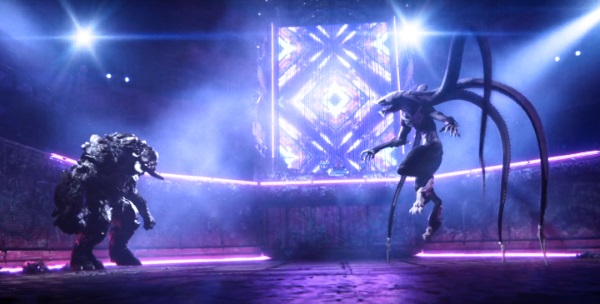 Ever since, Sonnie has been contesting in beasty deathmatches. While all of the other opponents merely control their beast avatars, Sonnie is the beast. If the other beasts die, their human controllers are untouched. So far Sonnie has had a 17 winning streak. Every time Sonnie steps into the ring, she’s fighting for her life. That fear of death is Sonnie’s edge. That is why she’s unbeatable.

The story begins with a rich match-fixer, Dicko, who approaches the trio and offers $500,000 to lose the next battle. They refuse. Sonnie (beast) is hurt bad in the duel but she beats her opponent, Turboraptor. The fight sequence and the pinning against the wall is reminiscent of Sonnie’s rape and she reacts by ripping Turboraptor to shreds. Dicko’s assistant Jennifer approaches to talk to Sonnie after the match. Jennifer is actually a mutant of sorts, Dicko’s “security”, and has come to kill Sonnie.

Jennifer seduces Sonnie and jabs her claws through her head. Dicko shows up to gloat and we’re finally shown that Sonnie is not in her body. She speaks via a speaker system. She kills Jennifer in an instant and grabs Dicko to finish him off. However, we are not given that visual treat of Dicko’s death. The short film ends with Sonnie asking Dicko “Do you feel it? (the fear, the edge)” as he pleads for his life.