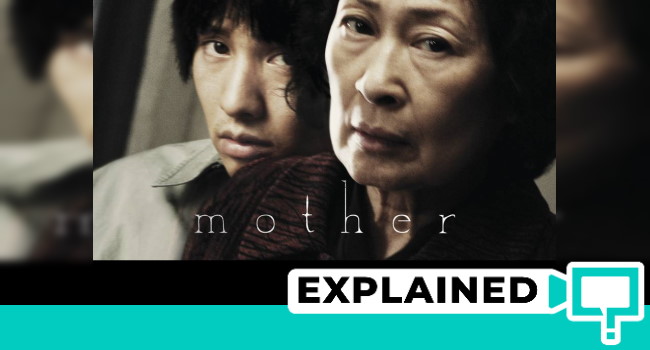 Mother (2009), or Madeo, is a Korean film directed by Bong Joon-ho set in the backdrop of a small town. His other films include Snowpiercer and the very popular, Parasite. The story is centered around Do-joon who’s a 20 something year old guy but is mentally challenged. He lives with his mother. His mother’s name is never mentioned, she’s just … mother. Do-joon hangs out with Jin-tae, a good-for-nothing vagrant. Two of them get into plenty of trouble with the cops.

One morning, a school girl is found murdered and hung out to dry like a wet cloth. The cops are unable to comprehend the heinous crime. Unfortunately for Do-joon, a golf ball he steals is found at the scene of the crime. The cops arrest him and is accused for the murder. His mother knows how childlike her son is and there is no way he could have committed murder. What follows is the journey of his mother’s struggle to collect evidence around the murder and to try and prove that her son is innocent. The film has moments that are a tad bit slow. It makes you wonder if you are going to regret watching the whole movie. No, you are not. It’s a good film and has a good conclusion. There is more to the plot than meets the eye. Here’s  Spoilers ahead.

Mother has had a tough life trying to raise her mentally challenged son. While her son is otherwise not very sharp, he has a sharp memory. But he has a confused mind and can rarely access these memories. An example of this is when Jin-tae and Do-joon assault the golfers, it is Jin-tae who busts the car. Jin-tae takes advantage of Do-joon by stating that Do-joon busted the car. Because of his confused mind Do-joon accepts this too.

Another instance of this is when Do-joon is 5 years old. His mother tries to kill him with rat poison. This is retained in his memory and he ends up accessing it randomly. Anyways, getting back to the plot. Do-joon is in jail and his mother is uncovering what might have happened. She eventually locates the phone of the murdered girl, Ah-jung. It is revealed that the girl sleeps around quite a bit and afterwards takes a picture of the guys too (without them knowing).

Mother figures that there is a friend of Ah-jung who knows how to make phones take pictures without making the snap sound. “The pervert phone”. This is how Ah-jung was taking all those pictures. Two guys are trying to get to the phone by beating up the friend for answers. With the help of Jin-tae, mother captures the two guys and interrogates them. They reveal the secret of the rice cake girl. Ah-jung was known to sleep with guys who offered her rice cakes. Why? Don’t ask. Some people are just messed up I suppose. Ah-jung otherwise seems normal. She doesn’t have any reason to be doing this. But she does.

Mother locates her phone and goes through the pictures in them and shows it to Do-joon. He happens to recollect an old man in the list. He sees this old man in the abandoned house the night of the murder. Mother locates the old man (a garbage collector). She asks him about that night.

What actually happened? Who murdered the girl?

The old man doesn’t know that he’s talking to Do-joon’s mother and tells her the story of that night.

This is the homeless man’s version.

The critical moment in the Mother (2009) is when Do-joon follows the schoolgirl. The homeless garbage collector is already in the abandoned house to spend the night. He means no harm. The girl runs and hides in the abandoned house. To scare Do-joon she throws a rock at him from the shadows, she misses. Do-joon throws the rock back into the shadows. For his luck, he doesn’t miss. The the rock lands on the girl’s face. She starts bleeding out. Do-joon takes her to the terrace and leaves her there. This version can be trusted because the homeless man has no reason to kill the girl.

However what he doesn’t tell mother is that it was not coincidence that the girl happened to come to the same abandoned house that he decided to camp for the night. The fact that his picture was on the phone means that she had slept with him before and they had planned to meet in the abandoned house again. There is a scene which shows him collecting rice in a bag. That’s the payment to the girl Ah-jung. As strange as this bit is, that is what she wanted as payment rice cakes or rice. The old guy doesn’t seem to be responsible for her death however.

This leaves mother in agony. She thinks her son is innocent. But this information clearly proves otherwise. To stop the old man from going to the cops with this information, she kills him and sets the place on fire.

Ah-jung is shown to have nosebleeds at times. The cops eventually locate her boyfriend and they find traces of her blood on one of his shirts. Looks like this is from her nosebleeds. But it leads the cops to believe that the boyfriend was responsible for her death and they arrest him. Do-joon is set free. Later when Do-joon visits the burnt site, he finds his mom’s acupressure needle kit. He picks this up and returns it to his mom. Fires he know his mom has missed the old man? Maybe, but he doesn’t seem to care.

Do-joon seems to have no recollection of the girl’s murder but he mentions that whoever did do this perhaps did it with the intention to help her. Do-joon mentions that perhaps leaving the body like that on top would help someone notice her and help her. Does this mean he’s remembering what he did? May be not. He’s still a confused mind and doesn’t realize that he’s killed her, but looks like he does hang her up like that for the reason he mentions. Mother has to now live with a murderer son and the fact that she too is a murderer and goes away on a trip. She performs acupuncture on herself in the thigh to forget her pains. The film ends.